Sometimes the Sun Does Shine There

Sometimes the Sun Does Shine There and Other Stories is a collection of five twisted tales of deceit, despair, decadence, derision and revenge.

The anchor story presents Larry, a stooper who picks up discarded tickets at the Off-Track Betting parlor hoping to find a winner among the detritus. He is tormented by Vic, a vicious thug who puts him in the hospital where he meets a diligent worker and closet artist named Maddie. Larry soon discovers he is not the only victim of Vic’s evil inclinations. A bizarre turn of events puts Larry in a position to rise up from the OTB floor and recover his dignity.

The other stories involve a grocery store robbery that exposes a fiend, a screenwriter on a mission who instead meets a minor character from a major motion picture, and a bratty bond trader who tries to mend a fractured relationship with his upstairs neighbor. The final story features two men who invent a device that scrambles their futures. Believing his business partner absconded with a valuable invention, the determined scientist embarks on a fruitless search which leads to his arrest for murder − thanks to the very device he invented. 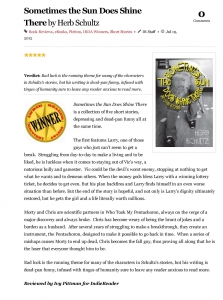 Sometimes the Sun Does Shine There

This site uses cookies. By continuing to browse the site, you are agreeing to our use of cookies.

We may request cookies to be set on your device. We use cookies to let us know when you visit our websites, how you interact with us, to enrich your user experience, and to customize your relationship with our website.

Click on the different category headings to find out more. You can also change some of your preferences. Note that blocking some types of cookies may impact your experience on our websites and the services we are able to offer.

These cookies are strictly necessary to provide you with services available through our website and to use some of its features.

Because these cookies are strictly necessary to deliver the website, refuseing them will have impact how our site functions. You always can block or delete cookies by changing your browser settings and force blocking all cookies on this website. But this will always prompt you to accept/refuse cookies when revisiting our site.

We fully respect if you want to refuse cookies but to avoid asking you again and again kindly allow us to store a cookie for that. You are free to opt out any time or opt in for other cookies to get a better experience. If you refuse cookies we will remove all set cookies in our domain.

We provide you with a list of stored cookies on your computer in our domain so you can check what we stored. Due to security reasons we are not able to show or modify cookies from other domains. You can check these in your browser security settings.

We also use different external services like Google Webfonts, Google Maps, and external Video providers. Since these providers may collect personal data like your IP address we allow you to block them here. Please be aware that this might heavily reduce the functionality and appearance of our site. Changes will take effect once you reload the page.